“Honestly, I started making music because I made a song for my cat.”

Isabella Lovestory is, with some coaxing, reflecting on her artistic journey from her hotel room in Los Angeles. It’s only when talking about her cat, Gati, that her guarded demeanour drops. “I was so excited about my cat’s elegance and lifestyle!” she laughs, eyes brightening. In some ways, she isn’t unlike her feline companion; her strain of reggaeton-pop luxuriates in opulence and pleasure, exploring everything from sexuality and fashion to perreo culture and partying. Her music is rebellious and restrained at once, showcasing all of the customs and aesthetics she has picked up from a life of constant upheaval.

Born Isabella Rodriguez in Tegucigalpa, Honduras, she and her family left for Virginia at 13 (a tumultuous age at which to be uprooted from everything she knew, she admits). Rodriguez landed in a school she describes as “extremely American”: vast halls, a large student body, and very clear cliques. “I was shook,” she said, shaking her head as if she were transported back to that time. She fell into a deep state of culture shock, receding further into herself every day. During this time, she found her greatest escape on the microblogging site Tumblr, where she spent hours fantasising over and building aesthetic worlds – the effects of which are clear throughout her digitally-drenched style of music and fashion. Shocking as the first move was, Rodriguez would have to do it again just a few years later – this time, to Montréal, Canada. “It’s plagued my life,” she sighs, remembering those rocky years, and also acknowledging her current struggles as a touring artist. But with the newfound independence that a walkable city with public transit provided, she became exposed to creativity on a larger scale; the art and culture she suddenly had access to opened her up to new possibilities, and she took it all in. Suddenly, there were galleries, museums and music venues she could access without adult supervision. But the trauma of relocating again took hold; she only felt capable of communicating her creative desires online, in private. “I was a total loner,” Rodriguez remembers. “I was always just by myself.”

Looking to pursue her artistic impulses further, Rodriguez decided to put her anxieties aside and enrol in art school. She focused on visual practices like drawing, painting and sculpting, and became a frequent face at gallery openings and art kid soirées. But she wanted more than that world could give her. Unsatisfied with art school and the art world – the stuffiness, the nepotism, the affectations – she decided to free herself from the expectations surrounding it. “I was like, ‘Fuck this,’” Rodriguez explains with an aloof detachment. “I hate galleries, I hate the art world. I wanna do something that’s more accessible to everybody.”

This makes sense for a child of the internet. It is, after all, the world’s most accessible tool – and, for Rodriguez, the biggest inspiration. She used her online education to shape her emergent music career: the metallic sound, the Y2K fashion, and even the very narrative of her rise. The internet is where she connected with Chicken, the New York City music producer who would become her main collaborator. Rodriguez started recording music in earnest at the end of 2018. Her 2019 debut single, Humo, is a moody banger that negotiates with her more self-destructive tendencies through heavily Auto-Tuned vocals, backed by robotic, EBM synths. “Deja de fumar que el humo me molesta/ Mejor ponte glamurosa y vámonos de fiesta,” she pleads in Spanish, translating to “stop smoking, it bothers me, better to just get glamorous and let’s go party”. These days, Rodriguez makes reggaeton that could only exist in the world as it is today – the one she has come up in: at once global and niche, and as equally inspired by popular internet culture as the underground. Hailing originally from Puerto Rico via Panama, and then filtered through New York City, reggaeton is a product of diasporas rebelling against racial and social hierarchies. Though the genre blew up in the early 2000s, the past decade has seen it become a perpetually evolving global phenomenon – even if it is undergoing a somewhat rocky transition into pop.

Reggaeton’s acceptance into the mainstream has catapulted this historically Afro-Latinx genre to unexpected heights. Today, as people continue to move across the world, it’s unsurprising to find that a sound that is so rooted in a long history of migration is resonating with so many. This has created an adaptable, hotchpotch sound that artists like Rodriguez can use to project their own winding histories. This is the new school of reggaeton that Isabella Lovestory represents: a musical style that has travelled far beyond its origins, breaking the old rules with  great success. It is a genre in which a Honduran-born, Montréal-based artist with digital aesthetics and a pop sensibility can experiment, twisting previously established formulas into something new, and amassing an increasingly dedicated following while doing so.

“I hate galleries, I hate the art world. I wanna do something that’s more accessible to everybody”

This ability to shapeshift is on full display on Rodriguez’s debut album, Amor Hardcore. The album has the DIY, almost punk spirit of the early days of reggaeton, but refracted through the lens of the multitude of genres, eras and geographies from which she draws. The clubby beat on lead single Fashion Freak, feels like something that could only happen at this point in reggaeton’s story, as people across Latinx diasporas project their varied experiences and sonic influences. The track’s cheeky lyrics are a self-assured ode to her personal style, as she asks you don’t get too pressed that it’s better than yours (“oops, me miro mejor que tú/ Desde el maquillaje hasta los shoes,” or, “oops, I look better than you, from my makeup to my shoes”). The song’s video, edited by Rodriguez herself, finds her strutting on a treadmill runway, going from naked to clothed in a series of outfits reminiscent of maximalist, mid-to-late noughties hipsterdom: garishly coloured Wayfarers paired with flat-brimmed hats, metallic gowns pulled from the 80s section of a thrift shop, and brightly coloured tights that once you’d find in any given American Apparel.

While Fashion Freak finds her uninterested in sex in favour of loving on her extensive wardrobe, on Sexo Amor Dinero, she does an about-face. Over electric guitars and a relentless, bass-heavy dembow stomp, she sings instead about not being afraid to love hard: “Extremo, esto es extremo/Yo no le temo al amor hardcore,” which means “this is extreme, I don’t fear hardcore love”. The accompanying visual explains what exactly amor hardcore means to her: Rodriguez presents herself tied up with the cord of her microphone, frolicking on the beach with a flaming, ankle-length wig, or lying in a bed of neon confetti. 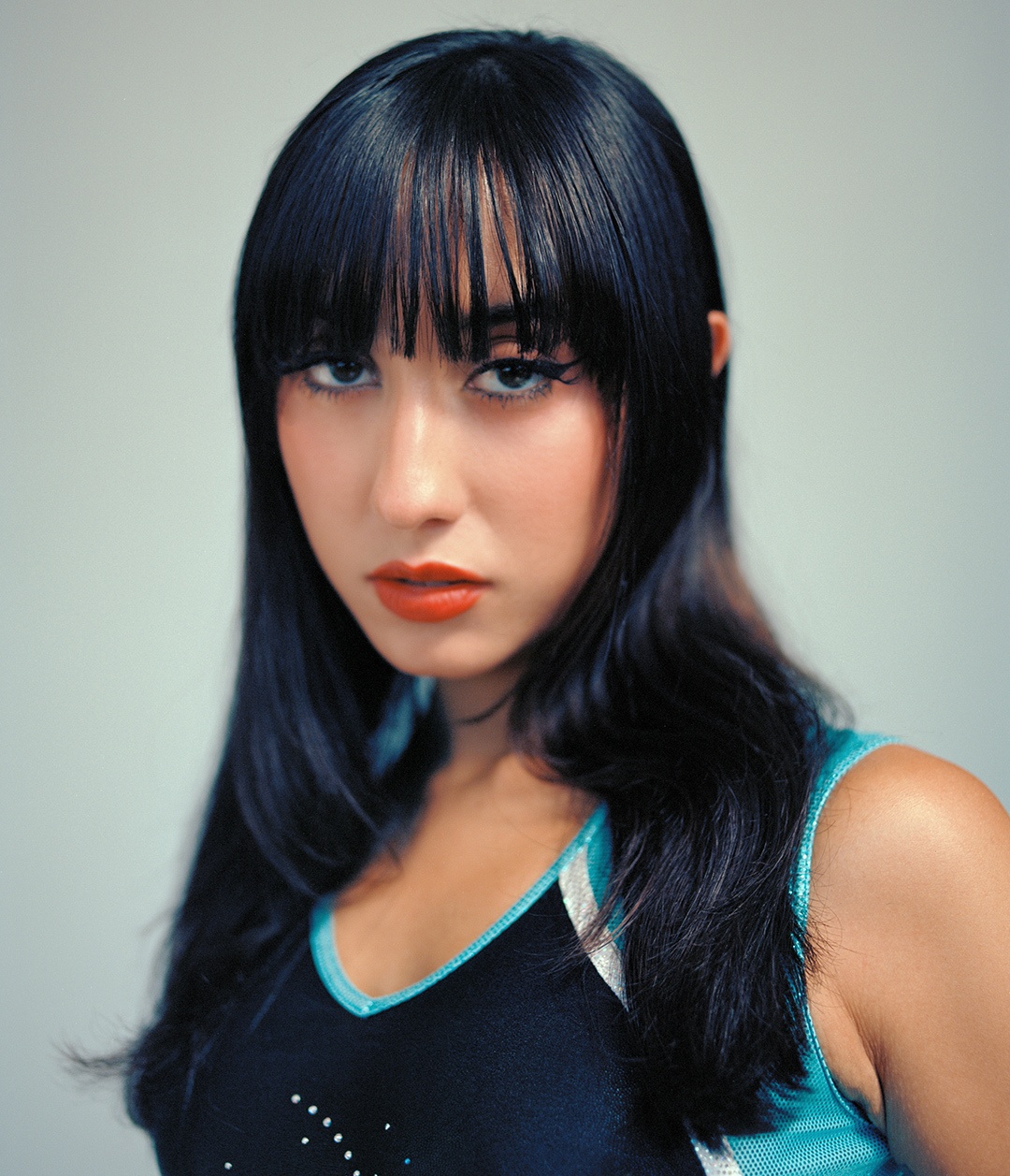 On the sensual Cherry Bomb, Rodriguez celebrates her own sexual prowess (“abro mis piernas y magia sale,” or “I open my legs and magic spills out”) over a sparse dembow beat and piercing synth jabs, evoking both the sound and thematic influences of the notoriously raunchy reggaeton duo Plan B, all while referencing iconic reggaeton classic Chulin Culin Chunfly by Voltio and Calle 13 (“ojalá, ojalá, ojalá y nos pongamos bien high”).

Despite – or perhaps due to – these wide-ranging inspirations, Rodriguez has become incredibly meticulous about her creative process. “I want each part of the song to be an extremely satisfying experience,” she explains in her quiet, self-assured tone. She goes on to enthusiastically reel off an expansive list of genres and artists that elicit this response in her – names and sounds that are connected only by her interest in them. “Actually, I just saw The Strokes yesterday!” she gushes. “It was amazing, I was crying.” She namechecks everything from K-Pop and shoegaze to artists like M.I.A., Britney Spears and reggaeton legend Ñengo Flow. This desire to be in control has found her more involved in the production process, too. Where previously she used to write vocals to beats sent to her, now she is increasingly behind the controls, emboldened by her trust of Chicken. “I don’t think people know that,” she exhales, a frustration familiar to many women in the music industry. “[My producer Chicken] puts the base of the beat down and we work on it together,” she explains. “The more we work together, the more involved and confident I am making executive decisions on the beat.” After coming up with a melody that works with a rough sketch of a beat, she begins to work on lyrics. During our interview, she pulls out a little black notebook with a list of words she plans to use in the songs she will be working on during upcoming sessions in LA. They are words that she likes, or that capture a vibe she’s chasing: Silueta. Porno. Cuaderno. Coqueteo. Psicópata.

“I like to be spontaneous,” Rodriguez winks. But while she relishes her carefree disposition, there is one thing playing on her mind. “It’s just really close to Mercury retrograde so I’m scared!” she laughs, trying to mask her very real nerves. “But it’s gonna be OK.” Should the planets decide to spare her album release, Rodriguez hopes Amor Hardcore show listeners her true versatility and capabilities as an artist. “The thing is, I’m so new, I never studied production or vocals…” she explains with a tinge of anxious excitement. “I really love to be independent and not rely on people, so…,” She trails off again, before catching herself and smiling. “I feel like I’ve been constipated with Amor Hardcore for years. I just wanna get it out and keep making music.”

Amor Hardcore is out now via Isabella Lovestory