For Indian classical musicians, mastering the craft requires years of diligent training. A practice reliant on oral communication, disciples embark on the lifelong journey of working intimately with a guru, who guides them on their unique path. Like most artists in this field, Arushi Jain started lessons as a young child in New Delhi, studying music at the prestigious Prayag Hindustani Music School and Ravi Shankar Institute. The 27-year-old multi-instrumentalist’s training remains a core part of her discipline – she still listens to the same compositions over and over again in order to memorise them. However, her trajectory has been less clear-cut.

“I don’t consider myself a ‘real’ Indian classical musician,” Jain says, reflecting on the road she has chosen. From learning different singing styles with a range of teachers to experimenting with new instruments along the way, Jain has distanced herself from the customs of her Indian classical counterparts. “It’s not my reality,” she explains. “My life doesn’t enable me to dedicate all my time to this [style of] music, which is the kind of commitment you need when you’re learning to understand this world in a deeper way.” Indeed, singing is just one of Jain’s areas of expertise: after studying Computer Science at Stanford University, she now works as an infrastructure engineer by day. 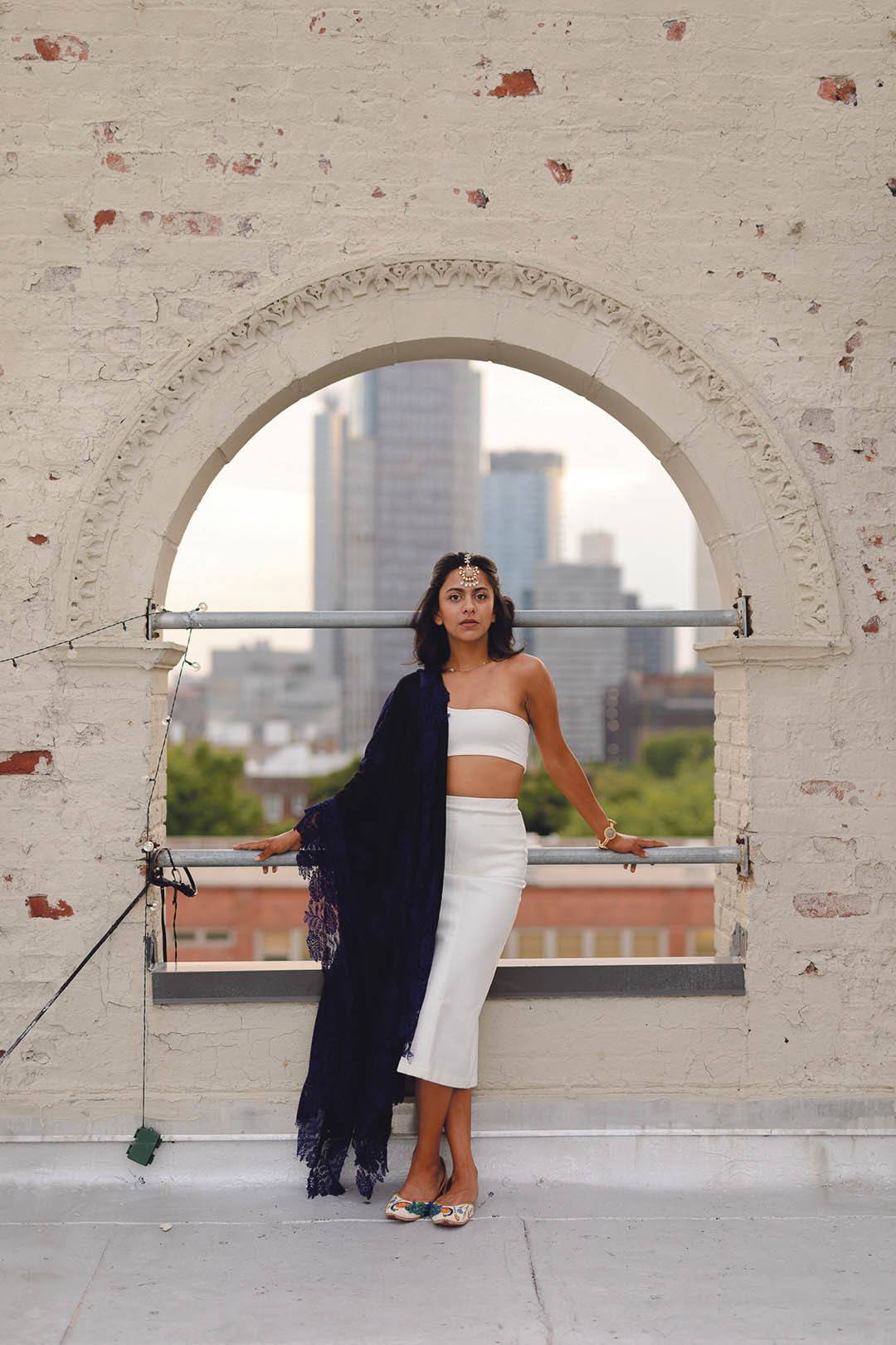 Though her music is rooted in Indian raags – complex melodic forms designed for specific moods, times or seasons – she transforms them into something new entirely, crafting rich, textural arrangements wherein vocals and synths wash over one another. By looping and layering, Jain’s arrangements turn her classical training on its head. Acknowledging the sensitivity surrounding her musical heritage, and keen to respect the journeys of her contemporaries, she finds rejecting a label or a set track liberating. “I have a lot more freedom to break the rules and do what I want,” she says with an air of self-assurance. “When I come across something accidentally that sounds really good, I think, ‘Well this isn’t really following the raag but I’m going to do it anyway because I’m not a pure Indian classical musician.’”

“I’m always tiptoeing the line between two different versions of me, and trying to stay true to both. Music helps me be a part of both worlds at the same time”

Naturally inquisitive and drawn to DIY culture, experimentation is at the heart of Jain’s work. “The modular synthesiser is an instrument that hasn’t really been used to explore raags, so I’m curious about that,” she says.

“I question how I can bring Indian classical music into this ambient, electronic world. How do I morph its original shape into a new one? What would that sound like?” Calling on her extensive arsenal of interdisciplinary skills and influences, Jain reimagines, recontextualises and redefines. The outcome is a series of sounds that are at once melancholic and uplifting, hewing to the emotive element that is so central to raags while taking advantage of the depth synthesisers create. “If it sounds good to me, I’ll just put it together,” she asserts. In welding musical cultures and the processes behind them, Jain simultaneously ties disparate strands of her identity. For her, bringing together the classical training of her motherland with a more recent fascination with electronic music – something that feels so distant to her own musical heritage, she acknowledges – is a way of making sense of, and expressing, her own cultural dichotomies. Jain’s Indian roots never take a backseat despite her physical distance: alongside her commitment to sharing (and “making people fall in love with”) the country’s sonic traditions, she uses her platform as an artist to shed light on socio-political issues that affect her community, namely the ongoing Covid-19 crisis. “I’m always tiptoeing the line between these two different versions of me, and trying to stay true to both,” Jain says. “The music helps me be a part of both worlds at the same time.”

Understanding the relationship between her training as a vocalist and her vested interest in sound synthesis was not instantaneous, however. “When I moved to the US, I had this really jarring experience,” Jain says, recalling an encounter with a judge at an acapella audition, who asked her to sing in English rather than her native Hindi. This incident was significant for Jain, who was settling into her new environment at the time. She stopped performing altogether. “I was like, ‘Fuck, this is over for me. I’m not meant to do this here.’” With singing to one side, Jain concentrated on her studies until the absence started to glare. “I came back to the question of: what can I do at the intersection of computer science and music?” It was at this point that she was first introduced to modular synthesisers; a means to bridge that gap. By coding sounds and building compositions from scratch, Jain was able to apply her engineering background to her artistic endeavours – a duality that is further reflected in the freeform music born from her formulaic approach. “I was immediately in love,” Jain says of the moment she first experimented with a friend’s modular rig. The excitement in her voice is palpable, regardless of the time that has since passed. “This was what I was missing, what I was craving.”

From thereon, Jain devoted her time to learning about the modular synthesiser, eager to explore this new voice in both her life and music. Accordingly, her early releases under the moniker OSE are borne from joyful experimentation. Most notably, 2018’s just a feeling – a self-confessed “accidental compilation” recorded in her bedroom studio which features resonant pulses and clinks that counter and heighten Jain’s dreamlike vocals. “For a long time, I didn’t want to use my voice as distinctively or as intensely in my music,” she explains. “I restrained myself from doing that because I wanted to explore this new instrument in my life. I had been working with my voice for so long.” Now more comfortable with the balance between the voice and technology and how they can interact, Jain places more emphasis on vocals in her debut album, Under the Lilac Sky. To mark this profound shift, Jain made the decision to set aside her former alias OSE and her online username Modular Princess, instead returning to her birth name – a subtle homecoming ceremony. “I think singing makes [my music] feel more like past me, so I’m trying to embrace that,” she muses. “I just want to own my identity because this record feels more like me.”

As the title suggests, the album is intended to be heard as the day breaks into evening; specifically, during the soft, purple glow of a setting sun. Inspired by several different evening raags, this temporal aspect is important to Jain. “I wanted to write an album that was a little bit more whimsical, a bit more open-ended. I thought, ‘Why don’t I write an album that makes me feel like I am in that moment, where I am able to relive that time of day through music – can I put together something that has such a strong mood?’” Recognising the impact of the sunset and her dusk wanderings on the writing process, Jain encourages listeners to engage with the record in a similar way: alone, either walking or performing some other early evening ritual. This attention to context is also an extension of Jain’s project GHUNGHRU – a label and accompanying NTS show which thoughtfully pairs music with poetry, literature and imagery in order to enrich the listening experience.

Jain is familiar with those moments of contemplation before the next stage. Though she’s already accomplished more than many, from developing her technical abilities as an artist to finding a means to explore her diasporic identity, her journey is far from over. She’s still learning, she insists, and always will be. “From a very young age I’ve always known that I’m never going to know it all,” she says, acknowledging the endless scope of Indian classical music. “Which is cool, right? Because then I’m always going to have something to learn.” 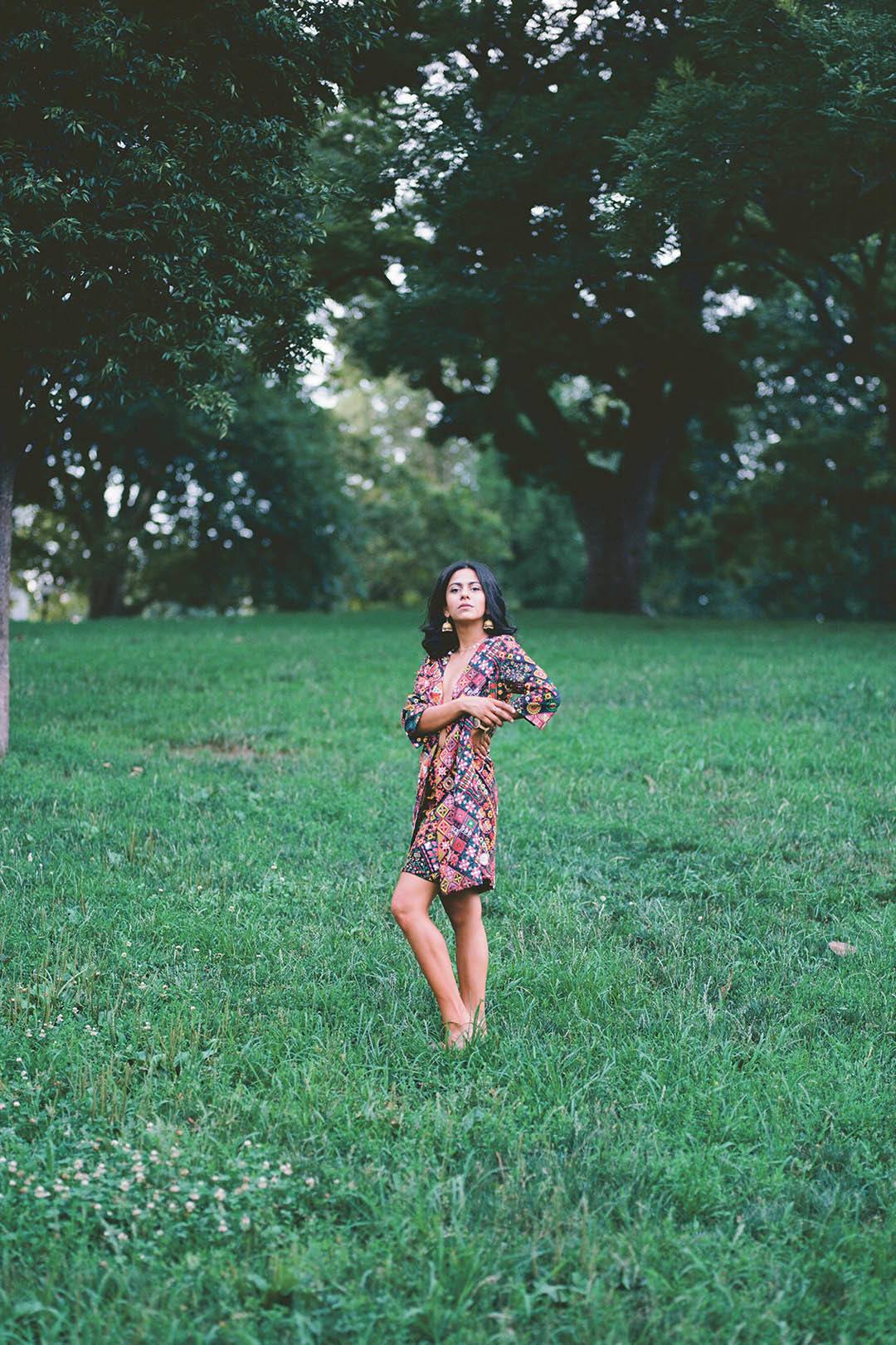 Across Under the Lilac Sky’s six songs, Jain invites the listener to turn inward and see everyday customs with a new curiosity. The expansive soundscape of My People Have Deep Roots is particularly stirring, while Look How Far We Have Come’s droning bassline, thick with arpeggiated synth lines, evokes a sense of movement. “It’s meant to prompt you to ask yourself this question of what comes next? Because when the sun sets, there’s this moment of change; you can go out to meet friends, or spend the night in cooking yourself a nice meal, for example. There’s a break, and a decision to be made. It’s a moment of self-reflection,” she explains. “It’s not meant to be a grand finale, rather a precursor to what comes next. It’s about figuring out what that grand finale is for you.”

Instead of finding this lack of closure frustrating, Jain sees comfort in it: she can continue carving out her path, on her own terms, at her own pace. “There’s nothing I need to reach, no height I need to scale, just a never-ending climb,” she says with quiet confidence. “The question is never-ending and the question will never be answered – but I’m fine with that.”

Under the Lilac Sky is out now via Leaving Records