When Central Cee was a teenager, he would often get the bus and ride it beyond the boundaries of west London, where he lived.

The experience, he remembers, showed him that the world was far bigger than he had previously imagined, and nourished his already active imagination. “I couldn’t speak to people about my aspirations because I always thought they were too big for everyone around me,” the 22-year-old rapper recalls. “It’s a problem. Maybe it’s the system, but I always wanted to get out. And a lot of people don’t have that ability to want more for themselves.” After these trips, west London was too small for Central Cee. Born in Ladbroke Grove and raised a stone’s throw away in Shepherd’s Bush, Central Cee – most people call him Cench – grew up in a part of the capital where a rich array of Black sounds, from reggae to jazz, dancehall to rap, have found expression and converged. Cench, it should be noted, has only missed Notting Hill Carnival twice in his life. It’s fitting, then, that his earliest and fondest memories involve music; he remembers how his dad would pick him up on evenings and weekends while playing old school hip-hop, he and his three younger brothers making up rhymes in the back seat of the car. It was, Cench says, a combination of his dad’s influence and the eclectic music environment in which he grew up that put him on this path. He was just eight years old when he began writing raps of his own. “What is already yours, will come to you eventually,” he claims. “For me, I just had to focus on my own timing and I feel as though these years putting in all this work is starting to show what I’m capable of.” It’s a simple enough mantra on the surface, but also a lesson in patience from someone whose artistic vision was clearly in place early.

When we talk via Zoom, Cench is poised and relaxed, seemingly comfortable with being candid about his life – perhaps because being at home provides a space to be vulnerable. The UK may be nearly a year into its stop-start lockdown, but still the rising star is hopeful, full of imagination and hunger. The last year has seen him release a string of breakthrough tracks that helped stake his claim within the flourishing UK rap scene: Day in the Life, Molly, Loading and his Mad About Bars freestyle. These tracks reveal an artist who is playful, who never takes himself too seriously and yet is capable of providing an astute social commentary: “You ain’t never sat in the trap with a pack/ Hear the doorbell ring and your heartbeat lag” he raps animatedly on Day in the Life. His style – lucid in his cadence and voice – heightens his clear-eyed observations. Cench also leans towards production that accentuates his voice, which often feels like a melting pot of all the sounds he’s grown up listening to, from hip-hop to soul and jazz. Loading features a jazz sample layered on a skittering drill bed, a manifestation of the influences of his youth. 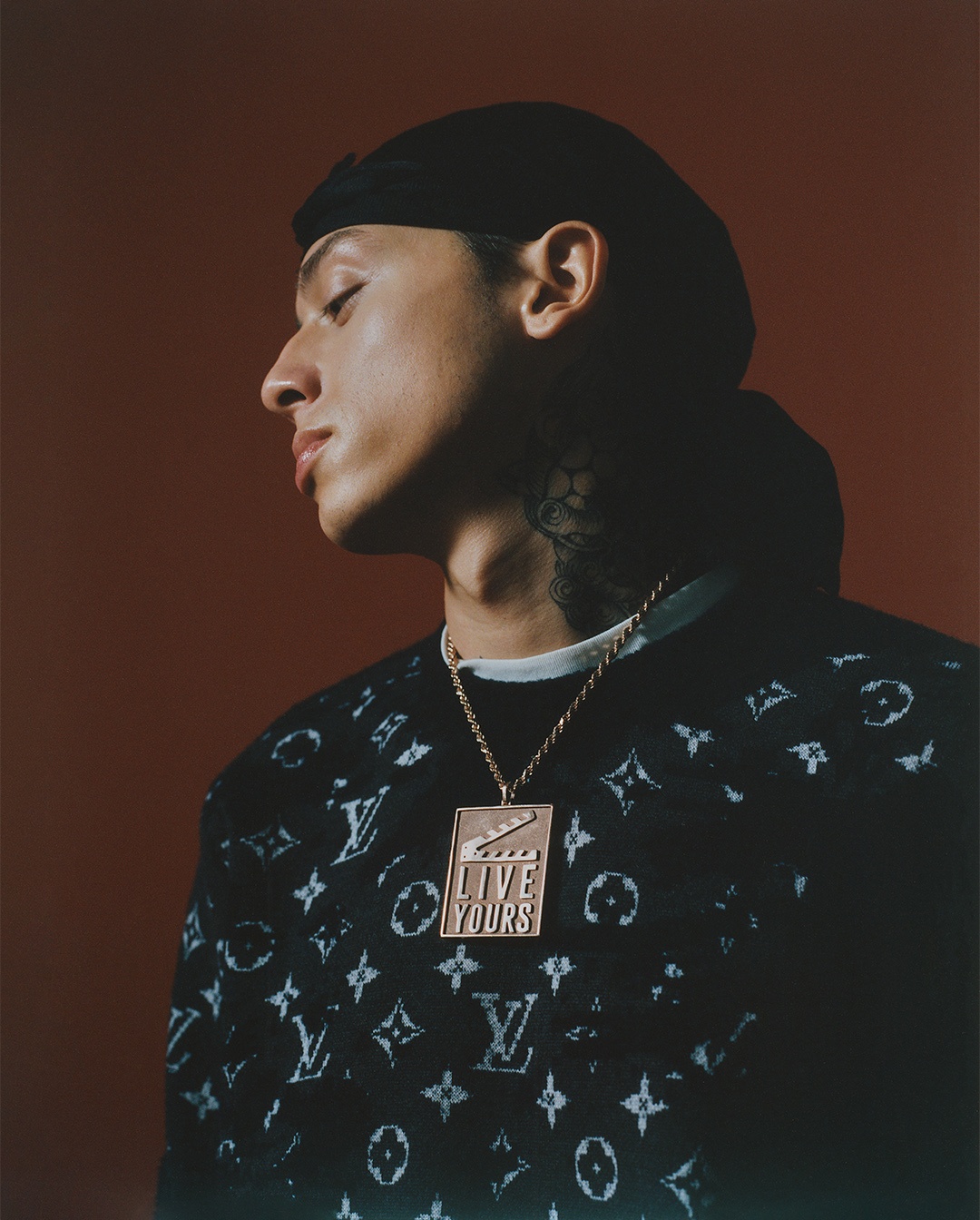 Whilst only coming to prominence relatively recently, those paying close attention will know that Central Cee has been laying the groundwork for some time now. In 2015, he recorded a freestyle over J. Cole’s A Tale Of 2 Citiez for LinkUpTV, displaying a rawness that set him apart. Another release, 2017’s Over You – a romantic story quite sonically distant from his more recent material – was an early indication as to his range as a rapper. His voice may have gotten deeper, the writing become more introspective and versatile, but those early years spent developing his skills show in the way he constructs his bars now: concise but simultaneously incisive. “If you’ve got what it takes I’ll take it/ This shit took ages/ Should know that you can’t rush greatness/ But you’re too impatient,” he raps, on his Mad About Barsfreestyle, flitting with ease between self-affirmation and the grandiose.

The eldest of four brothers, Cench became wise to the perils and tribulations in coming of age in west London from an early age. “I didn’t have anyone older than me besides cousins who I didn’t spend much time with. It made me grow up faster, I had to be more aware and responsible,” he says, unflinchingly. “There are a lot of invaluable lessons you can learn on the roads. I think I learned more on my way to and from school rather than in it – at least skills that would help me survive.” Inquisitive and forthright, Cench has never been one to leave things unscrutinised: “I’d ask a lot of questions about what I was seeing, certain things weren’t right but I couldn’t always articulate how. But for a lot of people from where I’m from, that’s normal life,” he explains. This perceptiveness has fed into his lyricism in natural ways: “I’m from a city full of skyscrapers, Armed feds, X5s, high speed chases/ Now they wanna help I don’t need your favours/ When I needed help I couldn’t see faces,” he observes on his Mad About Bars freestyle. “Even though I’m young, there’s a certain depth to my lyricism,” he explains, thoughtfully. “There’s not much difference between the writing in my old music compared to now, I was still expressing how I felt.” “There are a lot of invaluable lessons you can learn on the roads. I think I learned more on my way to and from school rather than in it”

Maybe it’s the fact that, like so many inner city kids, he grew up in close proximity to extremely wealthy enclaves. Shepherd’s Bush is within spitting distance of Holland Park, home to multi-million pound properties and where the environment is clean and idyllic. As an adolescent, exploring London, Central Cee knew he wanted more for himself. The moment he realised he could achieve it was the day he first walked into a recording studio. It was 2013, and his friend from school brought him into the studio where he recorded his first song. “It was a good day, I remember it vividly,” he says, smiling. “That changed my whole approach and inspired me to want to record more. That experience gave me the confidence I needed to put things out, especially when I was able to hear what I had just made,” he recalls. “Back then, studios weren’t as accessible as they are now but it showed me that this was real. I was gassed just sending the song around to girls and stuff: this is something that I’ve created.”

In many ways, for a young person who feels disenfranchised and ignored, the ritual of going to a studio, recording and then hearing your own music back is a transformative experience. Cench had an aspiration of making music, and the act of actualising it was a huge moment. “I didn’t care about much when I was 14, I wasn’t even living at home back then,” he remembers. The period coincided with him moving around a lot, staying with friends – but music provided focus. “I was just thinking about music. I didn’t know how it worked. There weren’t any people for me to look to, so I had to create my own way and dreams.” Almost a year on from the explosive run of singles in 2020 that announced Central Cee’s arrival comes his next project: Wild West. The mixtape builds out his vision with unflinching tales of life in the trap, circulating around themes of pulling yourself above difficult circumstances – and making your own way, on your own terms. “Take that risk and go independent, I just turned down six figures,” states the memorable opening of Pinging (6 Figures) before Cench declares, “I don’t wanna hear no Samsung ring, I don’t wanna hear that sound/ The kids these days don’t care ’bout getting in a bag, they just care about clout.” It’s an approach that’s observational much more than participatory, and though he finds the time to celebrate his own rise to stardom on tracks like Hate It or Luv It, you can’t outrun the feeling that he’s paying attention to the world around him, and reflecting back. Something that’s supported by his own experience growing up within a close-knit community, but also somehow setting himself apart. “I always enjoyed my own company and preferred being on my own so I never felt the need to be with a group,” he remembers. “It made me observant of everything around me whilst everyone else was in the midst of it, and they’re all normalised to the fuckery in endz.” “I always enjoyed my own company. It made me observant of everything around me”

There’s no doubt that 2021 will see Central Cee reap the rewards of years of hard work and self belief, and further refine a voice that already feels essential within the scene. But, true to form, he’s still learning. “I could always see my future, but now it’s just that much clearer. What I’ve now realised is how hard it is to have a vision of the future,” he reflects, sagely. In many ways, he’s still that curious kid on the bus, soaking in the city. Nowadays, there’s a strong sense of mindfulness about his approach to life; patience, being present, and gratitude: “I don’t have any expectations of where I’m supposed to be,” he says. “But I am feeling really grateful.”

Wild West is out now via Central Cee